This Paw Patrol Paw Patroller Review is part of the new 2015 Hottest Toys series that I will be sharing here on Saving Dollars and Sense that will highlight each of the hottest toys for the 2015 holiday toy season.

Each year we wait to see which toys will make it onto the Toys R Us Toy List so that we will know which toys your kiddos will be asking for and which toys will be in high demand. For the next couple weeks, I will choose one new toy from the list to share with you so you can be an informed shopper this year.

The set comes with the group’s ingenious leader, Ryder, his ATV, and the impressive Patroller rescue vehicle. The Patroller is complete with an elevator, helipad, realistic sounds, and lots of other cool features.

Folded up, the truck is ready to roll off on an awesome adventure. And when opened out, you can operate Ryder’s command center and oversee critical missions. 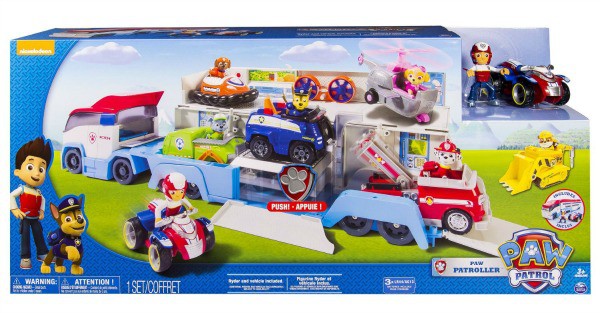 Features of the Paw Patroller

The toy is solid, well-made, and custom-built for adventurous Paw Patrol fans. It includes:

Is the Paw Patroller Worth Buying?

It seems that parents who reviewed this toy love it almost as much as their kids do! Past purchasers have reported that they were impressed with the sturdiness, functions, and scope for imagination the toy set offers.

A few reviewers expected the pup figures and their vehicles to be included in the set and were disappointed that they are sold separately. As with any purchase, it pays to read carefully and know what’s included in the package.

For fans of Nickelodeon’s Paw Patrol series, this is a gift with the “WOW” factor. Kids will love reenacting Ryder and the Pups’ adventures and dreaming up fabulous new missions.

For hours of fun and imaginative play, built around the themes of citizenship and teamwork, Paw Patrol is a great choice. If your kids aren’t already fans of the show, turn it on and buy them the new Paw Patroller today!