This Teenage Mutant Ninja Turtles Remote Control Skateboarding Mikey Review is part of the new Hottest Toys for Kids series that I will be sharing here on Saving Dollars and Sense that will highlight each of the hottest toys for the 2016 holiday toy season.

The toy, movie and TV show empire featuring the Teenage Mutant Ninja Turtles have longstanding places in the hearts of children as some of the most beloved characters of all time.

Whenever a toy comes along featuring one of the characters, it always causes plenty of excitement. This year, one landed on Walmart’s Hottest 25 Toys of 2016 list. It’s the Teenage Mutant Ninja Turtles Remote Control Skateboarding Mikey.

This toy has at its center – Mikey, who happens to be a fan favorite. He’s larger than life, thanks to the introduction of this remote control skateboard. Mikey is always up for whatever is fun and now, children can join in and share along some of that fun by using the remote to help Mikey carry out his awesome antics. 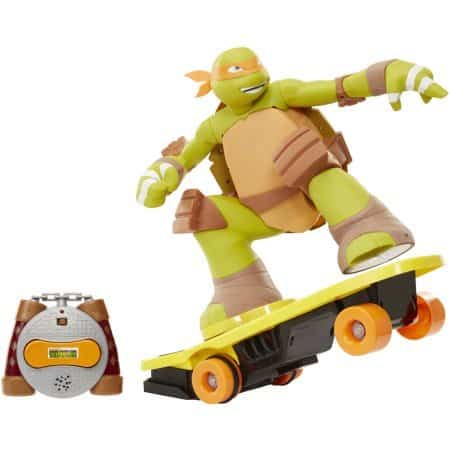 Those who love the moves and the thrill that’s involved with skateboarding will see the same adventure in the stunts they can help Mikey perform. All it takes is the remote control and you can see Mikey pop a wheelie.

With another move using the remote, you can see him do some pretty amazing 360s or 720s. You’ll also have the power to control the skateboard so that it can demonstrate the jaw dropping 1 foot spins.

Of course, everyone knows that anyone who has ever been on a skateboard will wipeout at some point. Mikey is no exception to that rule – but thanks to the capability of this toy, he can be back upright and ready to move on to the next stunt, thanks to the remote control’s ability to put him on his feet again using the spin button.

Mikey isn’t exactly the picture of silence with his ability to toss out 20 of the catch phrases that have always delighted audiences. If your child is a fan of the series, he’ll instantly recognize the various quips Mikey says.

The toy will delight you and your child will love to watch the high flying action stunts. The remote that comes with the skateboard gives users the ability to handle Mikey for different actions.

If kids use the left button on the remote, they’ll be able to witness Mikey perform a spin. When you’re ready to see him speed off, all you have to do is use the right button. The toy isn’t intended to be used outside and doesn’t work as well on carpet as it does on a hard surface.

With the purchase, you’ll receive instructions, the Mikey figure and the skateboard. You will have to affix Mikey to the skateboard before the first use. The toy also needs five C batteries, which you will have to buy separately. The recommended age for the toy is 4 years and up.