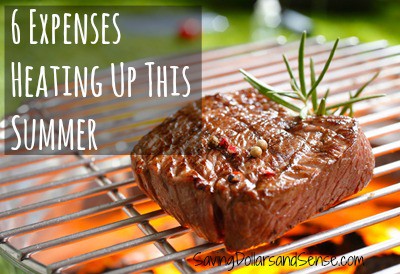 Summer break is finally here! Kids are out of school, pools are open, and the smell of barbecue floats gently on the breeze. While it’s the perfect time to kick back and relax in the outdoors, many of the products and services that make the season so enjoyable are heating up in price.

If you feel like you’ve been spending more than you should, use these tips to help save on summer’s biggest expenses.

Nothing says summer like hamburgers sizzling on the grill. However, you might be in for an unpleasant surprise the next time you visit the butcher.

Last month beef prices climbed to an all-time high, and those numbers will likely continue to rise as summer drought takes its toll on ranchers.

When feeding a large crowd, consider turning to cheaper alternatives like chicken and pork ribs.

Like ski gear in mid-December, the price of swimwear will peak as the summer heat intensifies.

While guys can find cheap boardshorts at Ross or TJMaxx, ladies with discriminating taste should take advantage of the coveted Semi-Annual Sale at Victoria’s Secret.

While the sale starts in-store on June 11, online shoppers can get started now with 25 to 40-percent off swimwear.

The Most Magical Place on Earth is quickly becoming the costliest place on earth, too.

According to recent headlines, admission to Disney parks is nearly $100 per person and that doesn’t include lodging and meals.

While it’s tough to shave the cost of park tickets, there are ways to get the most bang for your buck at Disney. Check out this post to learn more about saving on food, entertainment and more.

Much of the Western-half of the United States is expected to remain in a drought this summer, and some estimates project potential damages as high as $200 billion.

This doesn’t mean you have to let your lawn brown and wither away. Instead, water in the early morning hours to maximize water pressure and minimize loss through evaporation.

Should you have a landscaping project in the works, consider a xeriscape garden that uses native plants to reduce water consumption.

With fees adding up, summer travel is going to cost you a pretty penny, so book early and pack light.

According to Nation’s Restaurant News, the price of alcoholic beverages at restaurants is on the rise as eateries try to make up for shrinking profits.

Between October 2012 and April 2013, the cost of liquor increased 4.5 percent at family restaurants and a whopping 11 percent at fine-dining establishments.

Skip the beverage service and order water while dining out. You can likely buy a bottle of wine or a six-pack of beer for the same price as one glass at a restaurant.

Kendal Perez is a frugal blogger and bargain shopper who helps fellow shopaholics find hassle-free ways to save money. As the marketing coordinator for Kinoli Inc., site manager for a family of money-saving websites, Kendal has the resources to be an extreme couponer but prefers a less complicated approach to staying in-budget. Kendal has been quoted in such media outlets as People StyleWatch, CNN Money, FOX, ABC, NPR and Kiplinger Personal Finance. For savings tips and more information, visit HassleFreeSavings.com.