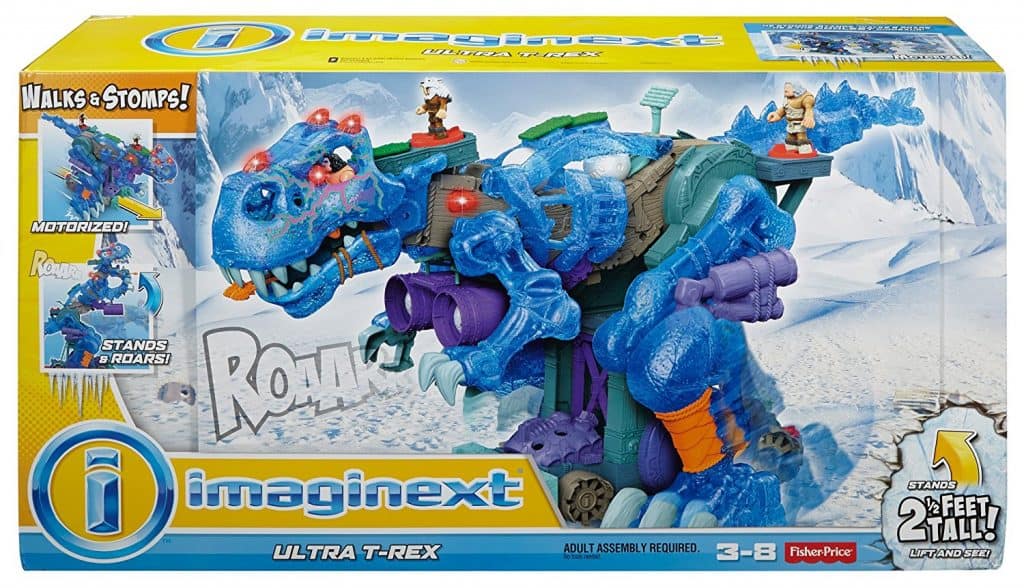 This Fisher Price Imaginext Ultra T-Rex Review is part of the new Hottest Toys for Kids series that I will be sharing here on Saving Dollars and Sense that will highlight each of the hottest toys for the 2016 holiday toy season.

Little children of all ages love dinosaurs – and the Fisher-Price Imaginext Ultra T-Rex is a great toy for young dinosaur lovers. It’s slated to be one of this year’s hottest toys for good reason.

The T-Rex Ice version is bright blue and stands at two and a half feet tall. It’s a fun, interactive toy that kids love to play with. When one of his three Power Pads has been activated, the T-Rex will move forward, taking about four steps at a time.

To make his movements even more fun, encourage your child to build small towers with blocks and watch in delight as the T-Rex knocks them over. As he moves around, his eyes and his spikes will glow bright red.

Touch another Power Pad and the T-Rex will then stomp and roar. His roar is loud and if he has any spears in his mouth, he’ll fire them, which kids of all ages enjoy seeing.

The T-Rex also has ice boulder cannons on his chest and in his back. Kids can put the boulders that are lightweight and look like ping pong balls into the launchers.

When the T-Rex’s levers have been pushed, he’ll fire the ice boulders into the air from his chest or his back. Despite the fact that the dinosaur launches ice boulders and spears, parents shouldn’t worry.

The launch is gentle and these play weapons are designed to be lightweight so kids won’t be injured during play. Along with the T-Rex, kids will receive four spears that can be thrown from his mouth, four ice boulders, and three cavemen.

The cavemen can climb onto the T-Rex’s back and rest on the lookout spots. Kids can have fun pretending the T-Rex is a fearsome predator that the brave cavemen are taming.

There’s also a trap door that the cavemen can use to escape from their enemies. When the good guys have managed to capture their enemies, they can put the bad guys in the jail cell that’s between the T-Rex’s big, blue feet.

The Pterodactyl glider is another feature that kids will enjoy with this playset. They can snap the glider onto the caveman and pretend he’s helping the mighty T-Rex finish his latest mission.

Because of his large size, several dinosaur lovers can play together without arguing since there’s plenty to see and do. Parents don’t have to worry about any of the spears or ice boulders getting lost because the T-Rex has built-in storage for the weapons, making it easy to clean up once playtime is over.

Do keep in mind that for the light and sound to work on this toy, you will need to purchase “AA” batteries since they aren’t included with the T-Rex. There’s another version of this T-Rex that’s not the blue ice version, so compare and see which one your child would like best!