You are here: Home / Recipes / Owl Themed Lunch
Note: this article may contain affiliate links. If you make a purchase using one of these links, I may be paid a referral fee at no expense to you. As an Amazon Associate I earn from qualifying purchases. Read our disclosure policy click here. 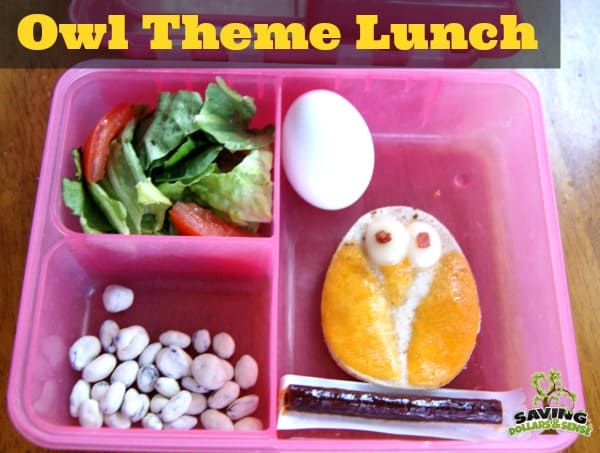 I was going for an owl, did I make it? My hubby said it just looked like a chubby canary, lol.

My daughter got it though, that’s all that counts.

I used an oval cutter that I think was an Easter egg to cut out a whole wheat tortilla, and tossed in some sliced cheese.

I used the same cutter to cut sliced cheddar, and trimmed wings out of the shape and the beak from the scraps.

Snipped 2 circles off stick cheese for eyes, and 2 tiny pieces of bacon bits for pupils.

I toasted the quesadilla in the toaster oven just long enough for the cheese to melt so it would glue itself to the tortilla.

She is resting on a Slim Jim branch, watching over her little pile of eggs (which are yogurt covered raisins) and the gigantic one that slipped in somehow (hard boiled).

Her little nest is a small salad (is it weird that my kids love salad?)

Don’t forget to include a small cup of dressing.

Check out these other Back to School Lunch Ideas!

Are you planting anything this year? ⁠⠀ ⁠⠀