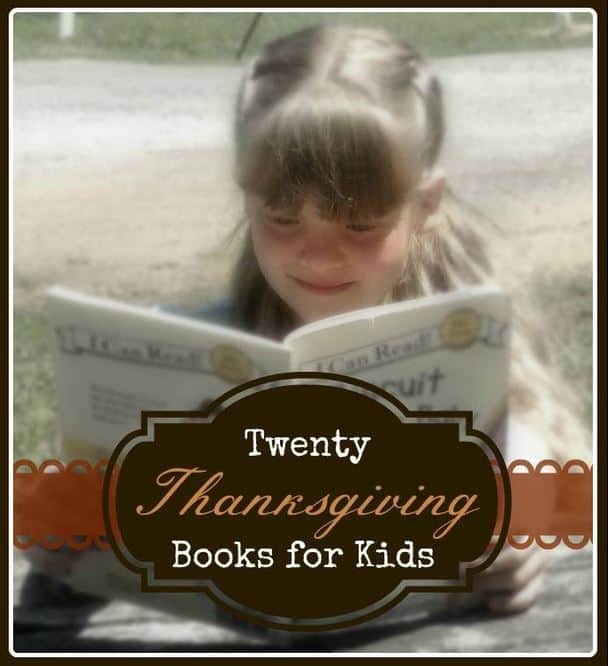 This is the perfect time to share some wonderful Thanksgiving stories with your kids! You will find a list of some of the best Thanksgiving Books for Kids arranged by age group below.

Today is Thanksgiving and George is so excited! He loves everything about the holiday—from the parade with music, jugglers, and big balloons to the delicious turkey shared with family and friends.

But even on Thanksgiving, the curious little monkey manages to stir up some trouble! Follow George through his Thanksgiving adventures with the short poems in this board book.

The fun, tabbed pages are perfect for little fingers! (Age Range: 3 and up)

T is for Turkey: A True Thanksgiving Story Paperback

Little ones will love learning about Thanksgiving in Tanya Lee Stone’s newest shaped alphabet book. Join in as the elementary school puts on a play that tells the true story of the first Thanksgiving. Rhyming couplets that flow through the alphabet help kids celebrate everything from Harvest to Pilgrims to Turkey. (Age Range: 3 – 5 years)

Ten little Pilgrims and ten little Wampanoag boys and girls are getting ready for the harvest feast.

In colonial Plymouth, the young Pilgrims hunt ducks and geese and dig up turnips and carrots. In a nearby village, the Wampanoag children dig for clams, fish for cod, and gather nuts and berries.

Finally, it’s time for the meal. Turkey, cornbread, cranberry stuffing, pumpkin, and Indian pudding are all on the menu-yum! First, everyone gives thanks, and then it’s time to eat and celebrate.

The simple, rhythmic text and autumn-colored illustrations are just right for sharing the history and fun of Thanksgiving with young children. (Age Range: 3 – 8 years)

Pete the Cat: The First Thanksgiving

But when Pete the Cat gets onstage, he makes learning the story of the first Thanksgiving fun. With thirteen flaps that open to reveal hidden surprises, this book is sure to be a holiday favorite for every Pete the Cat fan. (Age Range: 4 – 8 years)

This silly rhyming story about ten turkeys teaches children how to count backward. Girls and boys will gobble up this hilarious story about ten goofy turkeys and their silly antics: swinging from a vine, strutting on a boar, doing a noodle dance, and more. Veteran author Tony Johnston has written a joyful text, which first-time illustrator Richard Deas brings to life as wild and wacky fun! (Age Range: 3 – 5 years)

Thanksgiving Is for Giving Thanks

Sure, Thanksgiving is about pilgrims and history–and turkey, of course!–but most importantly, it’s a holiday all about everything that we are thankful for. Cheerful, colorful illustrations accompany the simple text in this celebration of family, friends, and the holiday that brings them all together. (Age Range: 3 – 6 years)

Biscuit is thankful for his bone, his biscuits, and lots more, too. Sweet puppy! Woof! (Age Level: 4 – 8)

This is going to be the best Thanksgiving ever! There is a gigantic turkey, Grandma’s secret stuffing, green beans, and authentic cranberry sauce, the kind that doesn’t come out of a can. And desserts? There are almost too many to count. Join Nancy and her entire family as they celebrate Thanksgiving in this brand-new storybook, complete with more than thirty swanky stickers. (Age Range: 4 – 8 years)

It’s Thanksgiving! (I Can Read Book 3)

It’s time for turkey! The parade is about to start. The pumpkin pie is in the oven. The whole family is gathered around the table. And everybody wants to pull the wishbone! From Children’s Poet Laureate Jack Prelutsky comes a scrumptious helping of twelve Thanksgiving poems to enjoy every day of the year! (Age Range: 4 – 8 years)

The Berenstain Bears Thanksgiving Blessings Ride along with the Bear family on Thanksgiving Day as Brother and Sister learn about all the things they—and YOU—can be thankful for … including faith, family, and the huge feast waiting for them at the end of their journey to Gramp’s and Gran’s. Includes a sheet of colorful stickers featuring the whole Bear family. (Age Range: 4 – 8 years)

Squanto and the Miracle of Thanksgiving Hardcover

This entertaining and historical story shows that the actual hero of the Thanksgiving was neither white nor Indian, but God.

In 1608, English traders came to Massachusetts and captured a 12-year old Indian, Squanto, and sold him into slavery. He was raised by Christians and taught faith in God.

Ten years later he was sent home to America. Upon arrival, he learned an epidemic had wiped out his entire village.

But God had plans for Squanto. God delivered a Thanksgiving miracle: an English-speaking Indian living in the exact place where the Pilgrims land in a strange new world. (Age Range: 5 – 10 years)

The Magic Tree House whisks Jack and Annie back to the eve of the first Thanksgiving. There they meet the Pilgrims as well as Squanto, a Native American who helped them. The story offers an age-appropriate, in-depth picture of what life was really like for early settlers, as well as the usual Magic Tree House adventure and excitement. (Age Level: 6 – 9)

“Thanksgiving Jokes” is a feast and a “corny-Copia” full of funny short jokes for kids. Each joke is about some silly aspect regarding Thanksgiving, from turkeys to pilgrims to pumpkin pie.

Kids will gobble up these humorous and short jokes while they look at the funny illustrations throughout the book. Every joke features two illustrations; one for the question and one for the punchline, so each joke can be enjoyed even more.

Find out what a pilgrims favorite music is, what a space turkey says, why turkeys go ‘Gobble, gobble’, and many more silly riddles. (All ages)

Mayflower 1620: A New Look at a Pilgrim Voyage

Plimoth Plantation and the National Geographic Society come together to tell the true story behind the legendary voyage of the Mayflower.

The vivid and informative text explores the story behind the exhibits at the living-history museum in Plymouth, Massachusetts. Primary sources record what the voyagers wore, what they ate, and telling details of their journey.

First-person accounts reveal the hopes and dreams they carried. Readers share in the long hours at sea, and in the dangers faced after landfall. Extensive end notes, a map, a detailed chronology, and a bibliography round out the full story of the Mayflower. (Age Range: 8 – 12 years)

In cooperation with the Plimoth Plantation, a living-history museum in Massachusetts, National Geographic has recreated the first Thanksgiving. Photographs by National Geographic photographers of the recreation at Plimoth Plantation illustrate this book. In 1621, in a small settlement on the edge of the sea, 52 English colonists celebrated their first harvest. The colonists were joined by 90 men of the Wampanoag tribe for a gathering that was to last three days in a town now known as Plymouth.

Over the centuries, there have been countless versions of this story, creating a popular myth of the first Thanksgiving. Many Americans imagine brave, peaceful settlers inviting a few wild Indians over for a turkey dinner. But there was no pumpkin pie or cranberry sauce at this celebration. There were no Indians with woven blankets over their shoulders and large feathered headdresses. No pilgrims with somber black clothes and silver buckle hats either. The English didn’t even call themselves Pilgrims. This book puts aside that myth and takes a new look at our American history.

It questions what we know and recovers the lost voices of the Wampanoag people. True history includes the voices of all its participants. 1621: A New Look at Thanksgiving invites young people to read, listen, and think about our shared history. The book also features a foreword, a section on the actual reenactment and the concept of living history, a chronology, an index, and a bibliography. (Age Range: 8 – 12 years)

Although he faces responsibility bravely, thirteen-year-old Matt is more than a little apprehensive when his father leaves him alone to guard their new cabin in the wilderness. When a renegade white stranger steals his gun, Matt realizes he has no way to shoot game or to protect himself. When Matt meets Attean, a boy in the Beaver clan, he begins to better understand their way of life and their growing problem in adapting to the white man and the changing frontier. Elizabeth George Speare’s Newbery Honor-winning survival story is filled with wonderful detail about living in the wilderness and the relationships that formed between settlers and natives in the 1700s. Now with an introduction by Joseph Bruchac. (Age Level: 9 – 12)

My Name Is America: The Journal Of Jasper Jonathan Pierce, A Pilgrim Boy

A young orphan journeys on the Mayflower to a new land full of adventure and mystery. When the crew arrives at Plymouth, they find a countryside of magnificent beauty, but also a life of harsh struggle. Jonathan strikes out on his own and forms a powerful friendship with the feared Nauset tribe. (Age Range: 9 – 12 years)

The eagerly-awaited final title in National Geographic’s popular American Documents series completes the broad sweep of the collection by casting all the way back to our country’s original document of record, the Mayflower Compact. The Mayflower Compact includes an engaging, interactive, and age-appropriate text, vetted by experts 40 pages generously illustrated with period artwork and archival photographs biographies of key figures in the document’s history the entire text of the original document and a complete list of its signatories excerpt from Mourt’s Relation, written by Edward Winslow and William Bradford, two of the colony’s founding fathers the charter of the Colony of New Plymouth Web links to further information a detailed glossary and index. (Age Range: 10 and up)

Twelve-year-old Samuel Collier is a lowly commoner on the streets of London. So when he becomes the page of Captain John Smith and boards the Susan Constant, bound for the New World, he can’t believe his good fortune. He’s heard that gold washes ashore with every tide. But beginning with the stormy journey and his first contact with the native people, he realizes that the New World is nothing like he imagined. The lush Virginia shore where they establish the colony of James Town is both beautiful and forbidding, and it’s hard to know who’s a friend or foe. As he learns the language of the Algonquian Indians and observes Captain Smith’s wise diplomacy, Samuel begins to see that he can be whomever he wants to be in this new land. (Age Level: 10 and up)

The Mayflower and the Pilgrims’ New World

Adapted from the New York Times bestseller Mayflower! After a dangerous journey across the Atlantic, the Mayflower’s passengers were saved from certain destruction with the help of the Natives of the Plymouth region. For fifty years a fragile peace was maintained as Pilgrims and Native Americans learned to work together. But when that trust was broken by the next generation of leaders, a conflict erupted that nearly wiped out Pilgrims and Natives alike. Adapted from the New York Times bestseller Mayflower specifically for younger readers, this edition includes additional maps, artwork, and archival photos. (Age Level: 10 and up)

You might also want to check out the Book Adventure program where your readers can earn fund prizes just for reading!